Wordspace, Public Works, and Voice in the Well present the 1st in a series of responses to the 100th Anniversary of the L.A. Times Building Bombing. 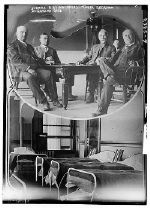 WRITERS ARE INVITED TO SUBMIT POETRY, SHORT SHORT FICTION, MINI-ESSAYS, PERFORMANCE WORKS for consideration.  Please send submissions to submissions@wordspace.net    for consideration for this event and upcoming readings. Writers are encouraged to read their own works.

OVERVIEW of the EVENTS (with Links at the bottom)

A century ago, the City of Los Angeles was caught in the middle of an 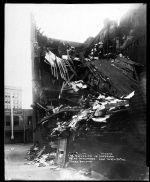 angry struggle between Labor and Capital.  Something had to give - and it did.  In the early morning of October 1, 1910, a strong blast reduced the fortress-like L.A. Times building to rubble.

The Los Angeles Times bombing was the dynamiting of the Los Angeles Times building in Los Angeles, California, on October 1, 1910 by a union member belonging to the International Association of Bridge and Structural Iron Workers. Intended as demonstration that would damage the building but not human life, the explosion nonetheless started a fire which killed 21 newspaper employees and injured 100 more. Termed the "crime of the century" by the Times, brothers John J. ("J.J.") and James B. ("J.B.") McNamara were arrested under suspicious circumstances in April 1911 for the crime.

The aftermath resulted in the “Trial Of The Century” in which well-known Labor champion, Clarence Darrow, came to the defense of the McNamara Bros, while a formidable and irascible General Otis (L.A. Times), marshaled the moneyed class against them.  The media and political components of this event and trial were also key elements in eliminating socialist Job Harriman as a viable mayoral candidate.

Their trial became a cause célèbre for the American labor movement. J.B. admitted to setting the explosive, was convicted, and sentenced to life in prison. J.J. was sentenced to 15 years in prison for bombing a local iron manufacturing plant, and returned to the Iron Workers union as an organizer. 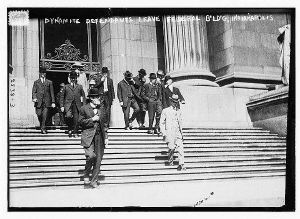 //darrow.law.umn.edu/trials.php?tid=2      An amazing collection of documents